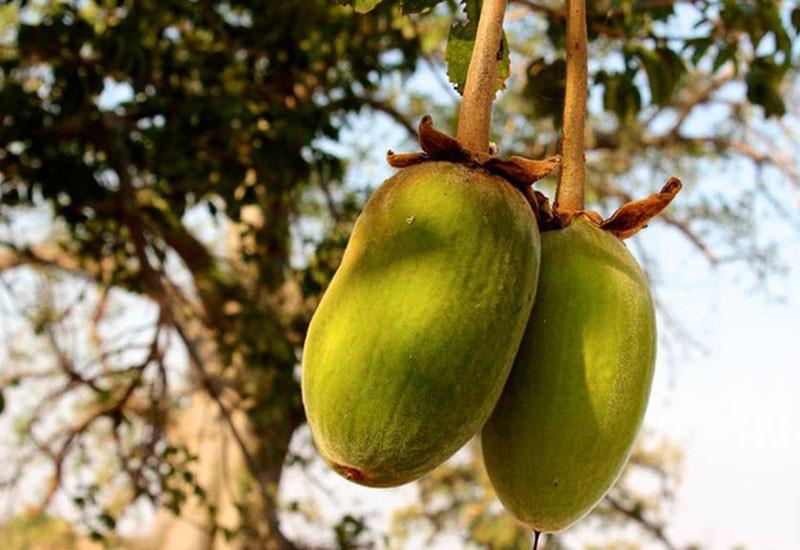 Baobab fruit is a genuine ‘super-fruit’ chock full of antioxidants and vitamins. The benefits of Africa’s ‘upside-down’ tree are widespread on the continent, passed on from generation to generation.

Baobab fruits take some time to grow, ripening only in the dry season. Once harvested and dried the white floury pulp has many different uses.

And the fruits’ seeds pressed for oil. Luckily you don’t have to wait for the dry season thanks to BFCS organic oils and powders.

IMMUNE SYSTEM: The human body cannot make or store its own vitamin C (unlike other animals), so we need to make sure we get a good supply from the foods we eat every day.

One of the key benefits of vitamin C is that it helps to keep our immune system strong, supporting our body’s defence against viruses, infections, diseases and other illnesses. Try shaking baobab powder into your orange juice or water bottle for an extra dose of vitamin C on-the-go!

SLOW ENERGY RELEASE: We know what you’re thinking… ‘slow? I need energy fast!’. Vitamin C contributes to normal energy release – this slow, and steady release sustains us for a longer period of time and prevents us from feeling tired all of a sudden. Therefore, it helps the reduction of tiredness and fatigue as well as supporting a normal energy-yielding metabolism which is “needed for all functions and activities of the body, including physical activity and exercise” (EFSA, 2012).

Sub your morning coffee for a sprinkle of baobab powder on your breakfast to keep you energised and awake throughout the day. We like ours stirred into porridge or blended into our morning smoothies.

BLOOD SUGAR: Baobab Powder contains 34% soluble fibre, this helps to slow down the release of sugars into the bloodstream, reducing energy spikes. Soluble fibre can also help to control blood glucose levels, improve blood cholesterol and reduce visceral fat (body fat that is stored around the organs in your abdominal).

The Functional Food Centre of Oxford Brookes University conducted a trial using Aduna Baobab Powder and found that human participants who consumed milk containing baobab had a lower blood glucose response than those who had a control drink with no baobab.

A later study by Oxford Brookes University also showed that baobab significantly reduced the rate at which sugar was released into the blood after digestion. As such, baobab is considered ideal for those following a low GI diet. It could also be beneficial for people with Type 2 Diabetes.

ABSORPTION OF IRON: Over 30% of the world’s population are deficient in iron – making it the most common nutritional disorder (World Health Organisation, 2017). Many turn to various iron supplements to increase their intake (we like to use moringa powder as a natural alternative). A less known fact is that vitamin C is needed to help the body absorb iron so pairing iron with vitamin C actually increases absorption.

Our bodies require two types of iron; heme iron (found in fish, poultry and red meat) and nonheme iron (present in plant foods, eggs, milk and meat). Compared to the former, non heme iron is not easily absorbed by the body. One of the ways in which absorption of both types of iron can be increased is by combining the consumption of iron with vitamin C.

As baobab is a rich natural source of vitamin C, it is easily accessible to the body and is better absorbed than artificial supplements. Sprinkle some baobab onto your iron-rich foods for a lemony zing or shake it into your water when taking your iron supplements.

DIGESTIVE HEALTH: Approximately 40% of people have at least one digestive symptom at any one time (NHS, 2016). Despite the growing awareness of the role of fibre in improving our digestive health, 80% of people in the UK don’t eat enough of it.

There are two types of fibre that our body needs: soluble and insoluble – and baobab contains both. Soluble fibre dissolves in the water found in your digestive system and can help to reduce the level of cholesterol in your blood.

Insoluble fibre doesn’t dissolve, it passes through your gut and enables other foods to move through your digestive system easily. It also helps to keep your bowels healthy and prevents digestive problems.

PREBIOTIC / GUT HEALTH: Most people are familiar with probiotics – good bacteria found in foods such as yoghurt, kefir and kimchi which have beneficial effects to your health, particularly your digestive system. However, very few are familiar with prebiotics which play an equally important role in gut health. Prebiotics are indigestible dietary fibres, also known as soluble fibres, made up of non-living organic matter.

The soluble fibers of baobab fruit pulp are prebiotics: non-digestible food components that beneficially affect the host by selectively stimulating the growth and activity of beneficial microflora (Journal of Food Research, 2016).

It’s these prebiotic qualities that could explain how baobab might just be the secret to having the world’s healthiest gut. Studies of the Hadza Tribe in Tanzania, some of the planet’s last remaining hunter gatherers, found they have 40% more diverse gut microbiomes than the average Westerner! “According to scientists, the Hadza have the most diverse gut bacteria of anyone anywhere in the world” (Independent, 2017). One of their key staples? That’s right you guessed it – the baobab fruit.

The benefits of including prebiotics in your diet don’t stop there, a study by the University of Colorado Boulder suggested that prebiotics can improve sleep after a stressful event, suggesting that adding baobab into your diet can also help support a good night’s sleep.

RADIANT SKIN: According to The Journal of Nutrition, Baobab has the highest antioxidant content of any fruit. Baobab powder has twice the antioxidants gram per gram of goji berries and more than blueberries and pomegranates combined.

Baobab is packed with antioxidants and vitamin C which supports collagen formation – helping to give you radiant, glowing skin as well as preventing wrinkles.

In fact, baobab’s skin benefits are so impressive that Aduna Baobab was the first ever food item to be sold in the beauty halls of prestigious London department store Liberty where it is listed as “must-have” thanks to its exceptional beauty from within properties.

PREGNANCY: It is generally advised that pregnant women should consume 85mg of vitamin C per day (a 10g serving of Aduna Baobab Powder contains 26mg) as it helps the body produce collagen. Collagen is a structural protein that is needed for your baby’s normal growth during pregnancy. It plays a vital role in structuring a baby’s body and supporting their developing organs.

Vitamin C, also known as ascorbic acid, helps your body fight infections and protects cells from damage – helping to keep you healthy. Another key role that vitamin C plays during pregnancy is its ability to increase the absorption of iron – a vitamin that most pregnant women are deficient in. Iron is needed to help our bodies produce red blood cells which carry oxygen around the body and to the baby.

If that wasn’t enough to convince you of baobab’s super-powers, it is also a good source of fibre. Nutritional Therapist, Eve Kalinik explains how this helps to “support bowel movements and a great addition for new mums to help fight fatigue that comes with having a newborn”.

ALKALINE: Baobab is considered to be one of the highest alkaline foods available as it has a PRAL (Potential Renal Acid Load) rating of -52. Eating highly alkaline foods helps to balance our body’s pH levels.

The Journal of Environmental Health (2012) found that alkaline foods can also help defend our bodies from chronic diseases and ailments (such as hypertension, arthritis and deficiency in vitamin D). Have you tried adding Aduna Baobab to your green juices?

PRE/POST WORKOUT: Physical exercise increases oxidative damage to cells and muscle tissues so it’s important to increase your intake of vitamin C to reduce its negative effects. This is supported by a study conducted by the University of North Carolina (2006) who found that participants taking doses of vitamin C before exercise and for 4 days after reported less muscle soreness compared to the group who took a placebo.

Another study by the University of Birmingham found that volunteers who took vitamin C exhibited 75% more post exercise recovery than those who consumed vitamin E or a placebo.

Any cookies that may not be particularly necessary for the website to function and is used specifically to collect user personal data via analytics, ads, other embedded contents are termed as non-necessary cookies. It is mandatory to procure user consent prior to running these cookies on your website.